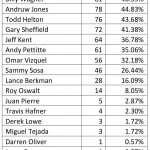 Los Angeles – In its tenth annual Hall of Fame election announced Tuesday, the IBWAA added two players to its digital Hall of Fame.

With those exceptions, the IBWAA ballot was identical to the one used by the BBWAA. All voting is done electronically.

Complete voting results are as follows: